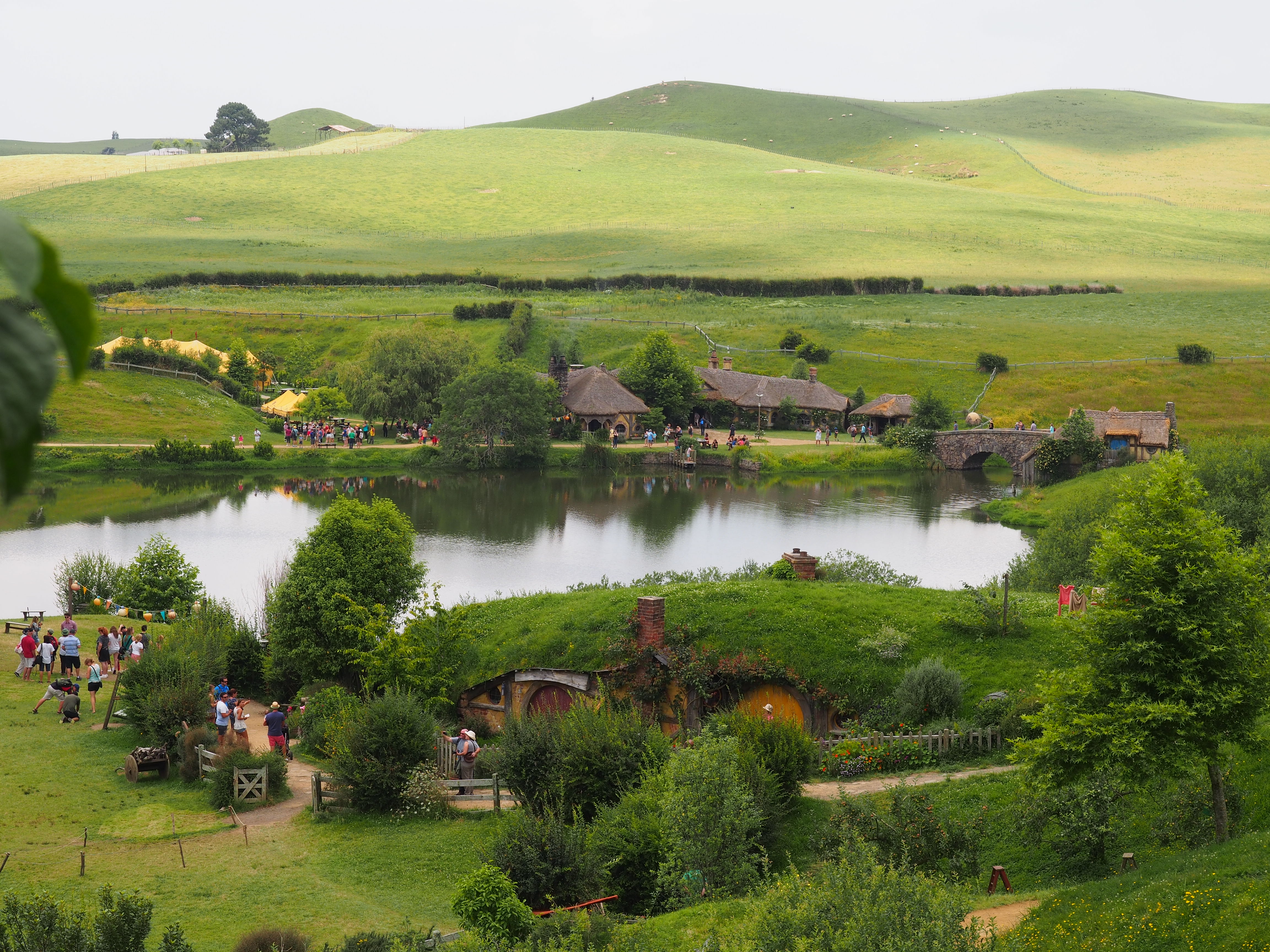 The first thing one notices on arriving in New Zealand is the absence of promotion of anything Lord of The Rings (LOTR) or Hobbit related. You really have to go digging to find any reference to the J.R.R.Tolkien adventures that inspired a series of films filmed in the country. It’s kind of like visiting Australia in the 1980s and not finding references to Crocodile Dundee, or visiting Australia in the late 90s and finding no references to the Crocodile Hunter – I mean crikey! Australia has a lot of crocodiles let’s just move on.

Of course New Zealand has never gone in for the ostentatious, flagrant self-promotion their Tasman rivals revel in. And just as you have to go out of your way to find a real wild crocodile in Australia – even on occasions having to travel beyond the outskirts of Sydney – you’re going to need to be a dedicated LOTR or Hobbit fan to find places like Hobbiton (TM, all rights reserved), the Misty Mountains, Weta Cave Museum (where they make Orc armour and magic see-through Elven underwear for Orlando Bloom), a tree in Wellington where one  of the characters once walked past in one of the films, or that rock the would-be king guy Aaragon fell off with that wolf-horsey thing that orcs ride around on when they are sniffing out man-flesh and the such.

Hobbition is on no map of Middle Earth I could find. We only came across Hobbiton when we were lost somewhere between Rotorua and Auckland and accidentally took a left at the popular tourist town of Matamata. There weren’t even any signs for the place, unless they were carved in runes on an oak tree that we missed. 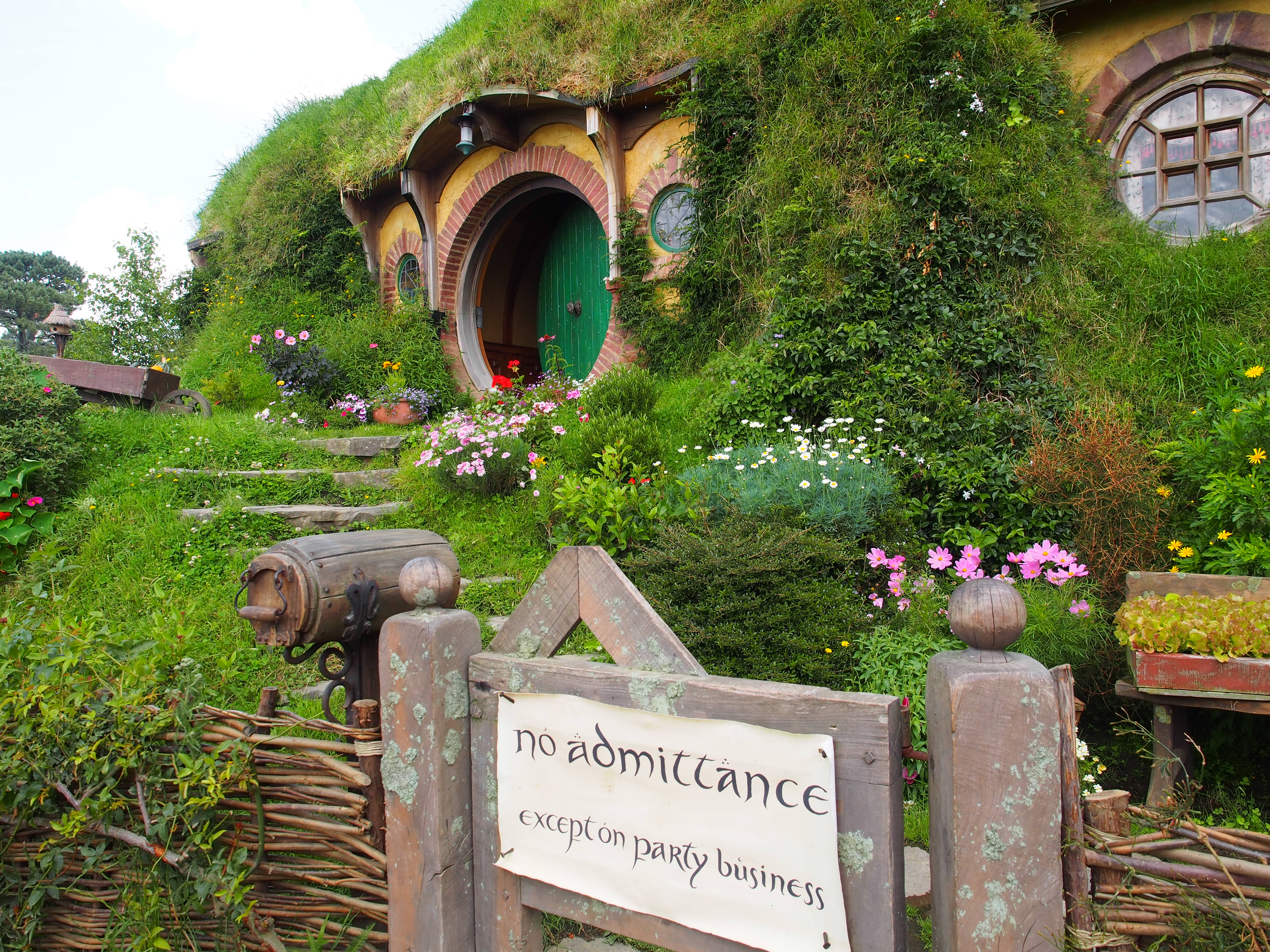 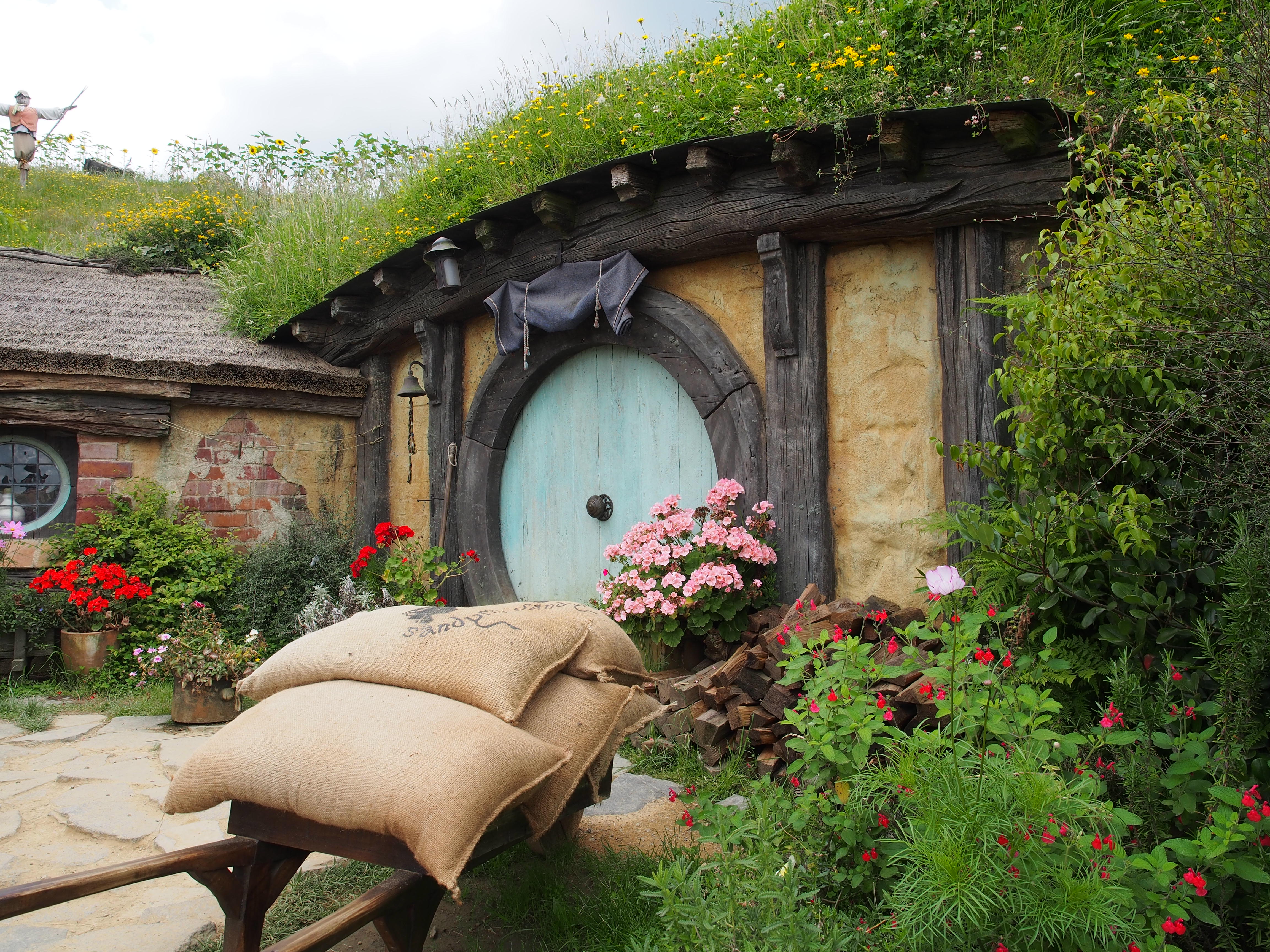 Hobbiton is a quiet, magical, place where you’ll forget the real world exists even before your official Hobbiton tour begins as you kill some time in the gift shop buying Hobbit Hole replicas and Modor tea towels, then sit outside for hours sipping your cappuccino and sucking on New Zealand’s famous ice-cream, which is made from real cream they get from real cows that dance merrily in the Shire, listening to the tales of weary travellers from afar.

Such as this typical one:

“What is your problem?” enquires the fair Australian maiden to her forlorn companion as they sit at the wooden picnic table across from us waiting for The One bus their tickets will allow them on that will provide entry to Bag End and the Water, and other Hobbit stuff, which departs every 5-10 minutes in peak tourist season (also known as the 12.45 pm). The One bus ticket also comes with a free Hobbit ale or ginger beer from the Green Dragon. 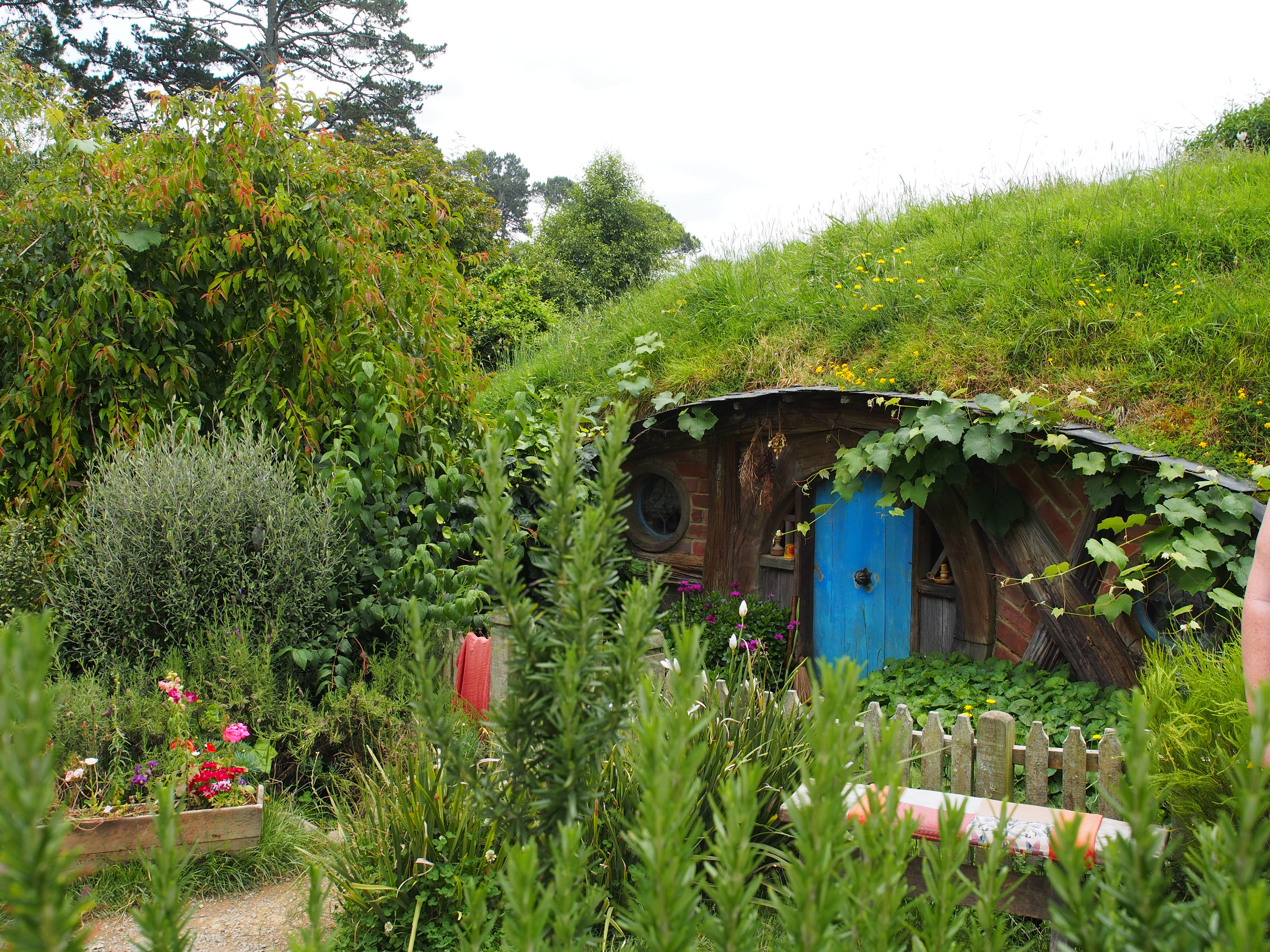 “It wasn’t my idea to come here, have to wait an hour for our tour”, mumbles Mopey. He seems to be under one of Saruman’s or the Dark Lord Sauron’s – I can never tell the difference between them, I think one of them doesn’t have a body any more – dark MOFO magic.

“You need a fucking attitude adjustment”, retorts the maiden, with a complexion as fair as a wood elf, through gritted teeth.

Their travel companions return with more New Zealand ice-cream and cappuccinos. They’re an American man and woman. The two men don’t make eye contact as the American guy goes on about not understanding the system for collecting his Hokey-Pokey. They’ve obviously been through many ordeals. I mean even Frodo and Sam quarrelled along the way. I felt I may be able to help with their predicament by slamming a replica Gandalf staff into the ground and yelling something Gandalf might say in such a situation such as when he enters that king’s hall who is under the shadow of the Dark Lord and shouts “I am not Gandalf the Grey anymore! I am Gandalf the White! And I lift this evil spell off thee!!!” – apologies to LOTR fans, I spent literally minutes on the internet looking for the exact quote, but just as it is in New Zealand, it is difficult to find any references to LOTR on the internet, so I gave up. I do own the movie on iTunes but I couldn’t be bothered turning it on right now, but you know what I’m talking about, he throws back his grey cloak and we’re all like, holy shit dude you’re so white it’s reflective!!! Anyway, our friendly hotel manager from the Regent of Rotorua Boutique Hotel & Spa, located on Pukaki Street, Rotorua (mention this blog and you’ll get a free bagel) where we’d stayed the night before had rung up the Hobbits and got us on an earlier tour than we’d originally booked so our tour bus was here and we had to go, leaving the woman scowling at the man and hoping, like we all did with Frodo, that they’d make it to the Mountain of Doom and be done with the darn adventure. 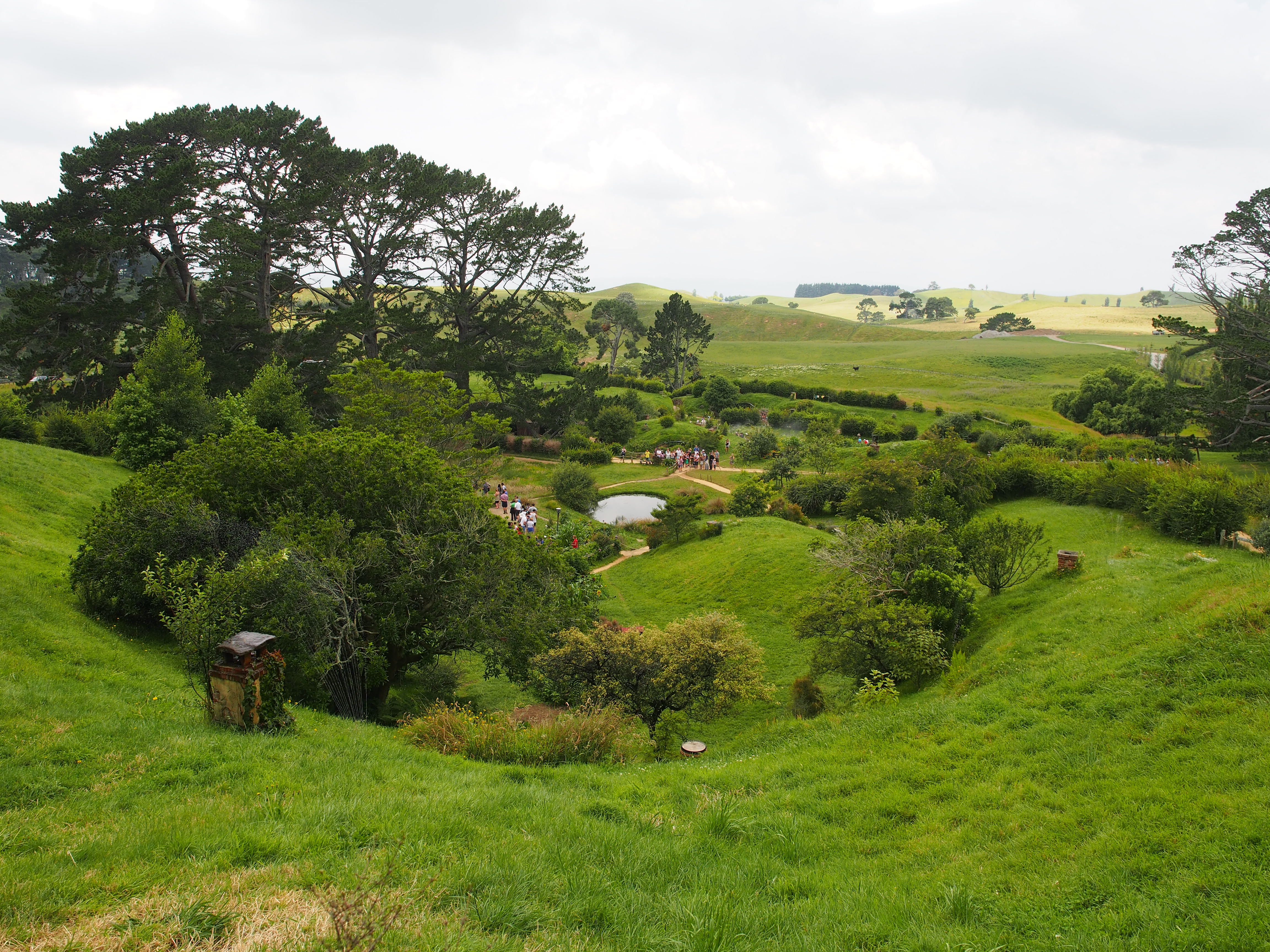 Our English backpacker tour guide was nice, he wasn’t in the least bit funny though he tried hard and any deficiency with his humour was made up for in spades with his abundant friendliness and ability to take photos of our whole family when we squeezed into hobbit holes. He also literally got spades out in the mornings to help tend the Hobbit vegetable patches, as did all the other tour guides, though when pressed he couldn’t tell the difference between kale and cabbage. Which is understandable as being from England he’s probably only seen vegetables all chopped up in coleslaw at KFC.

No lack of vegetable knowledge could detract from how well Hobbition is set up though. You don’t need to know a thing about Hobbits, or Gandalf the Grey or White, or WTF LOTR stands for to appreciate the magic of the place. 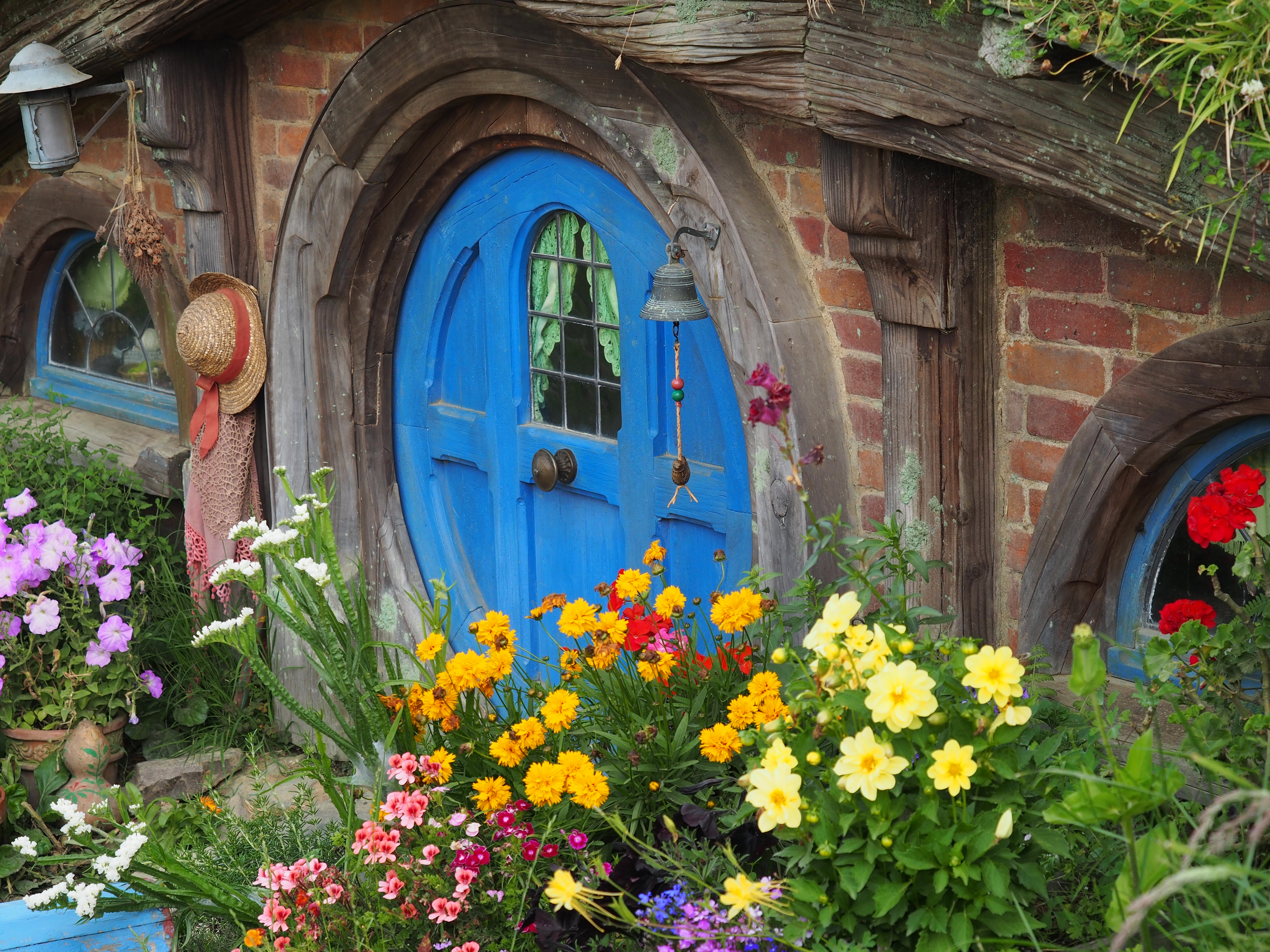 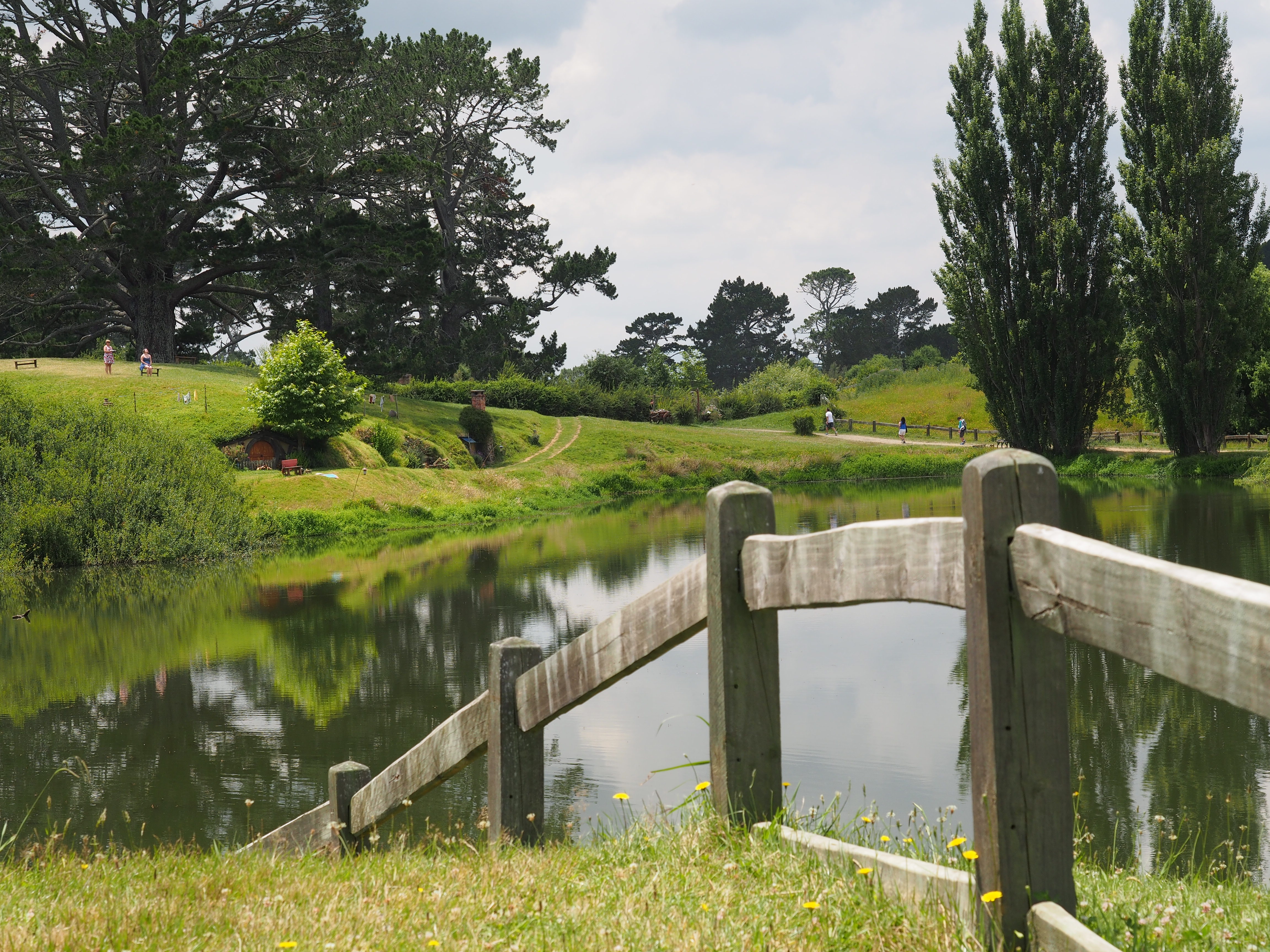 Though just as with real magic, the place is a mixture of reality and illusion. There’s real apple trees, with real fingernail marks from tourists testing to see whether they are real, mixed with the likes of this oak tree sitting on top of Bilbo’s house which is a metal trunk with fake leaves imported from the renegade Chinese provence of Taiwan. 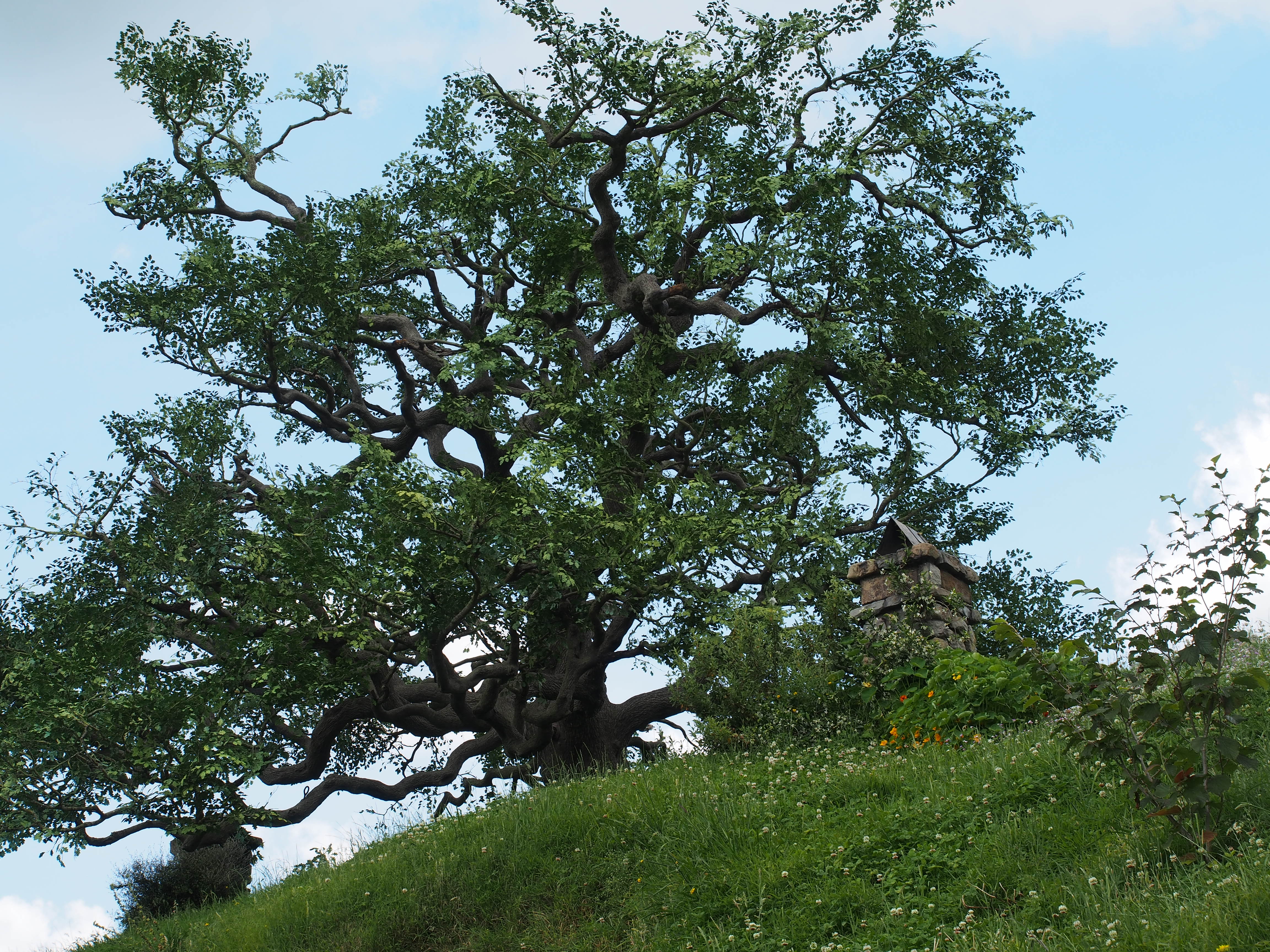 The sheep in the nearby paddocks are real, but they didn’t look enough like real sheep to be in the LOTRs or Hobbit so Sir Peter Filmalot imported some proper looking ones from England. The Hobbit hole’s doors are solid, but at best you’ll only find a bit of dirt behind them with more dirt where the pantry should be. The fences are made of real wood, and the lichen is real, but it’s been encouraged to grow by plastering it with milk and yoghurt, which makes for a nice snack as you walk by. But as you meander through the place you come upon the best fake-real thing ever in the world – the Green Dragon Inn, which is just over this bridge and near this water wheel thing. My son cut out the ‘n’ in the sign, but you get the gist. 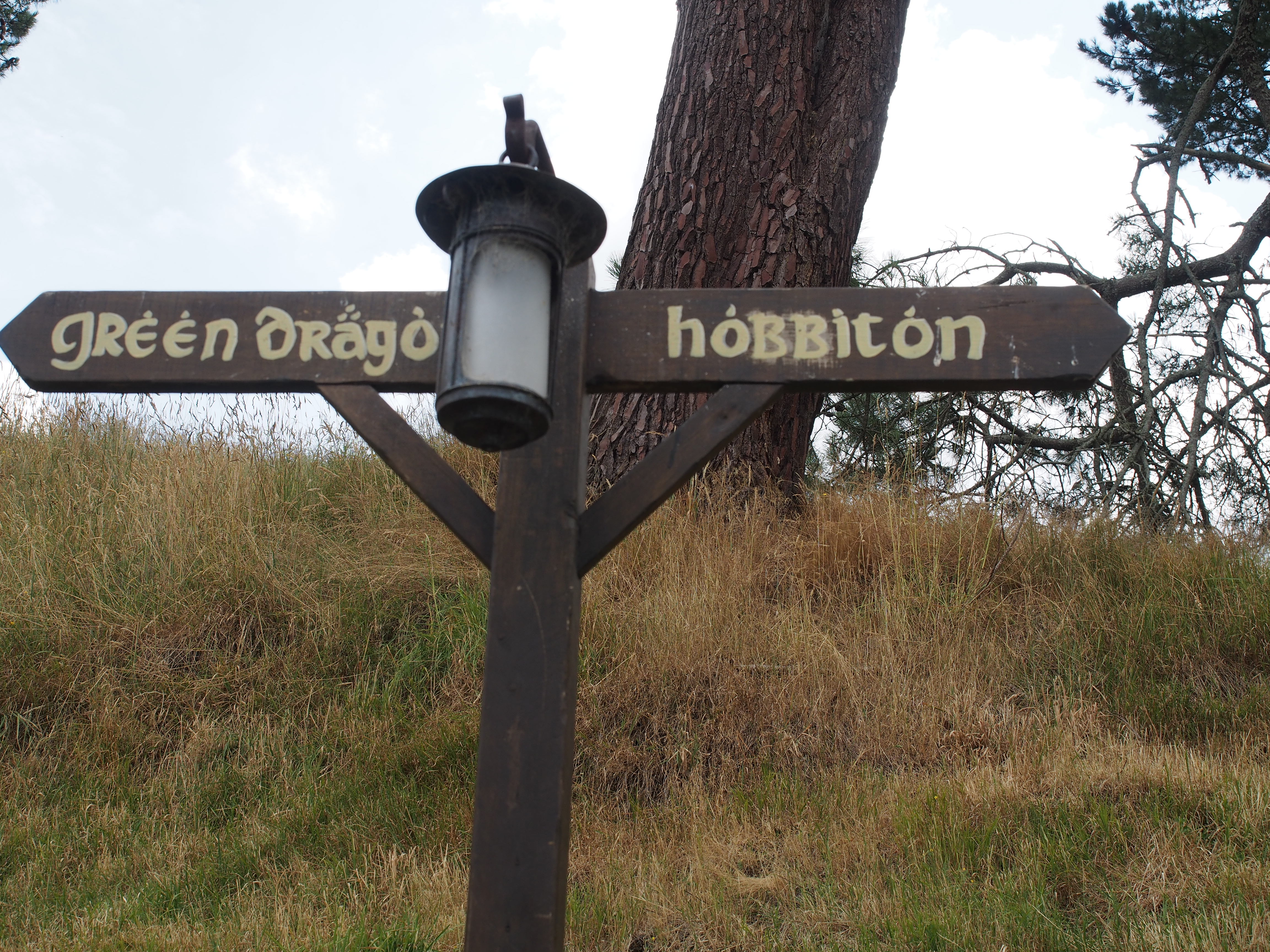 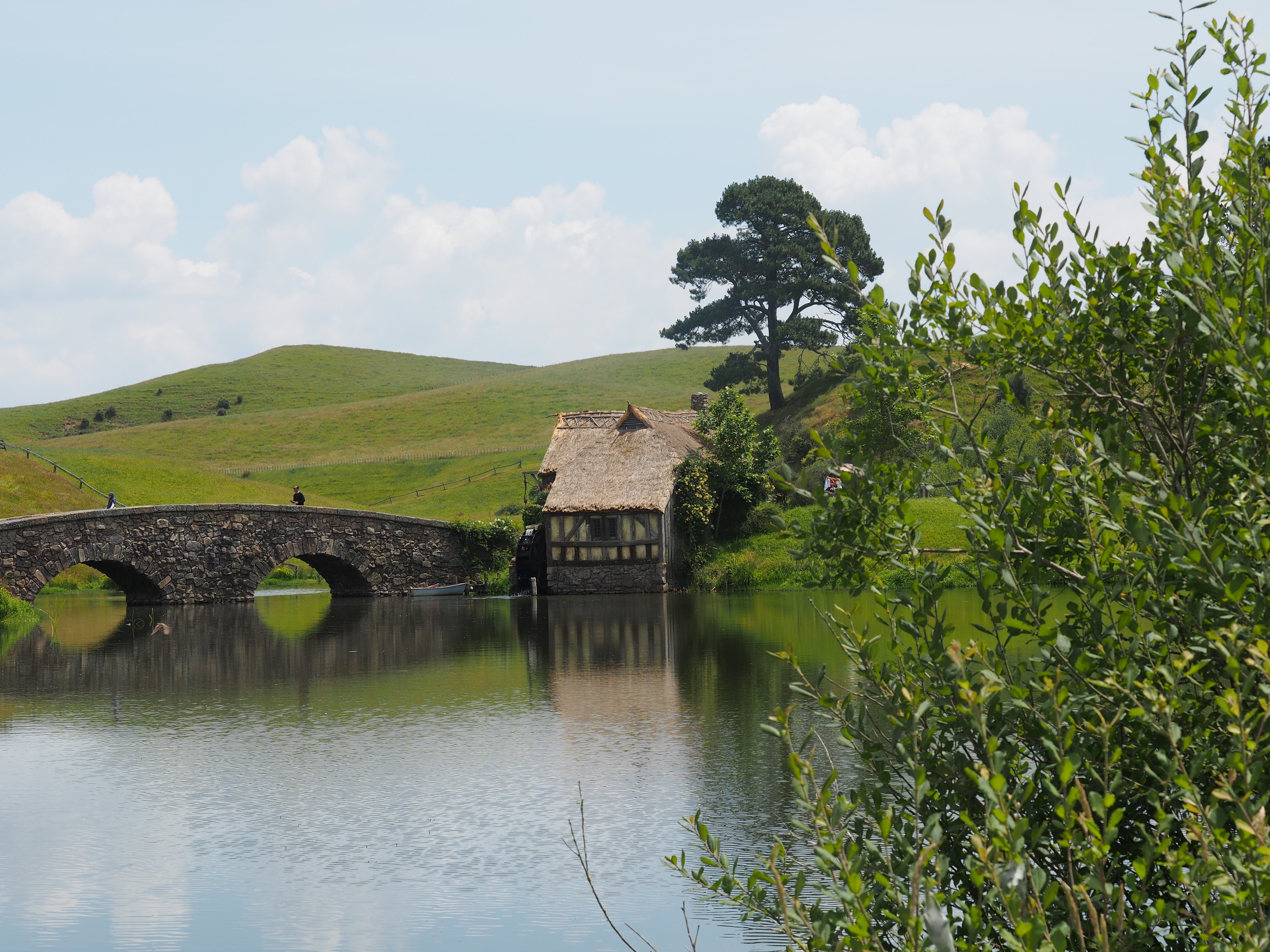 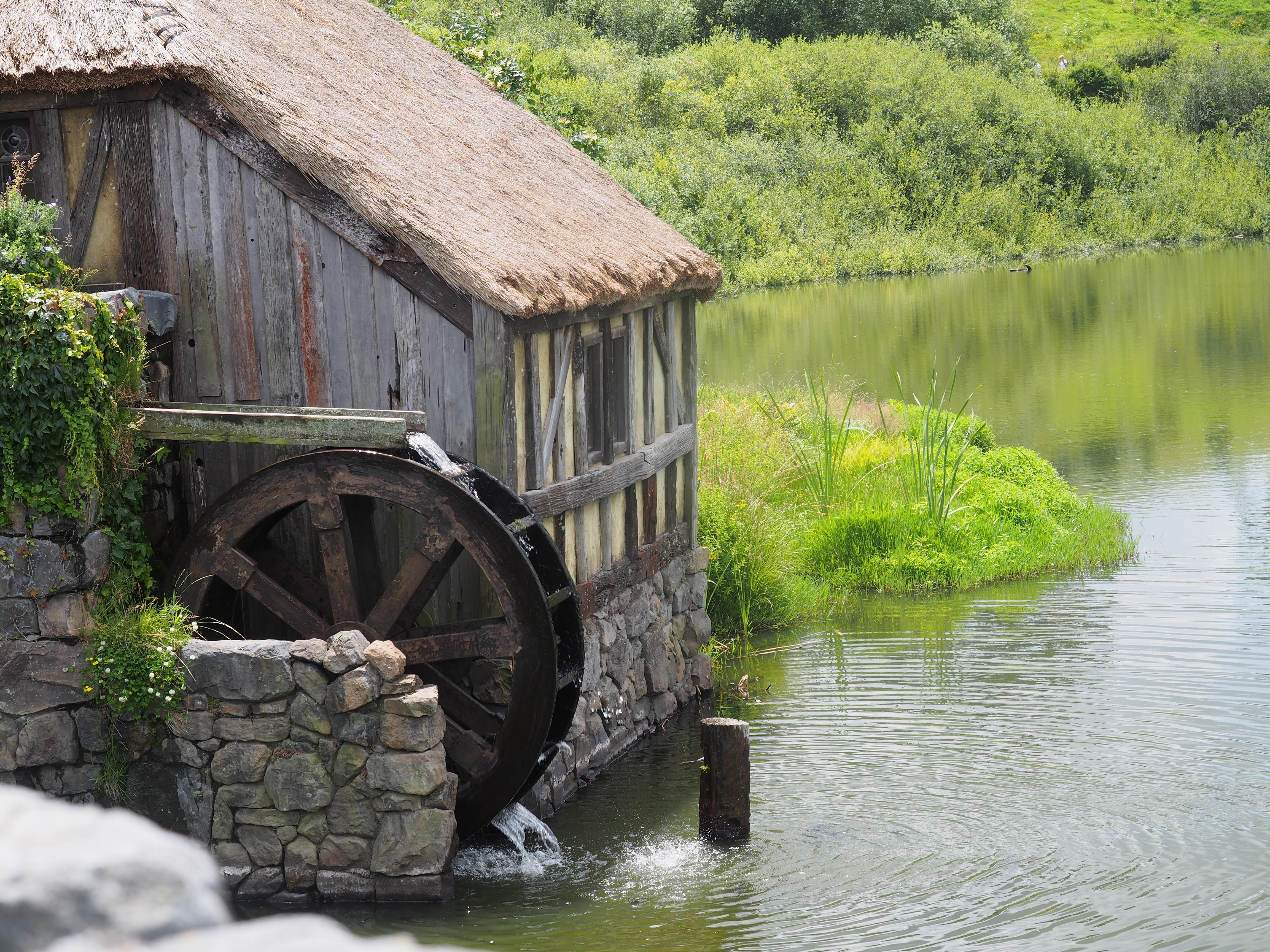 The Green Dragon is where all the real magic happens, not only can you get vittles, you can also get real Hobbit ale alcoholic beer and real Hobbit ginger ale for the underaged Hobbits – although since the children and adults are of a similar stature it’s hard to tell.

Hobbit Ale from Hobbiton is perhaps the most delectable beverages you are ever likely to partake off in the entire universe outside a Pan Galactic Gargle Blaster.

So after downing a few quick ones at the end of our little tour, and then heading back on the magical adventure bus with my head nice and fuzzy and light, I grab myself a few more bottles of the fine ale from the gift shop to take back to Australia looking forward to kicking back on the veranda (I don’t actually have a veranda, but it sounds kind of cool) and reliving the magic when I get back home.

In Auckland, the night before our flight I put out my precious ale to be put into our check-in luggage. “Remember don’t put it in the carry-on”, I tell my wife.

At Auckland Airport at 6 in the morning, the ale safely checked in in the check-on – or so I believe – we head through NZ customs, placing our carry-on through the x-ray machine. Like the Eye of Sauron, the custom x-ray sees the Precious everywhere. Once through, the customs lady with her blue latex gloves on, opens the bag, and with a big smile and all the casualness of an orc, pulls out all the bottles of Hobbit ale, which is both contained within a dangerous glass bottle and of dangerous quantity of liquid over 100mls. She lifts them over the bin, and without a word tips them in.

And they tumble slowly in as though time has slowed to half of its usual speed, like the One ring tumbling into the Mountain of Doom, and I feel like Gollum, wanting to dive into the bubbling fire after the ring, and I put my hands to my head and in my head yell, “my Precious!!!!!!!!!!!!!! Those tricksy Hobbbitses took my Precious!”.

And thus my tragic tale ends. 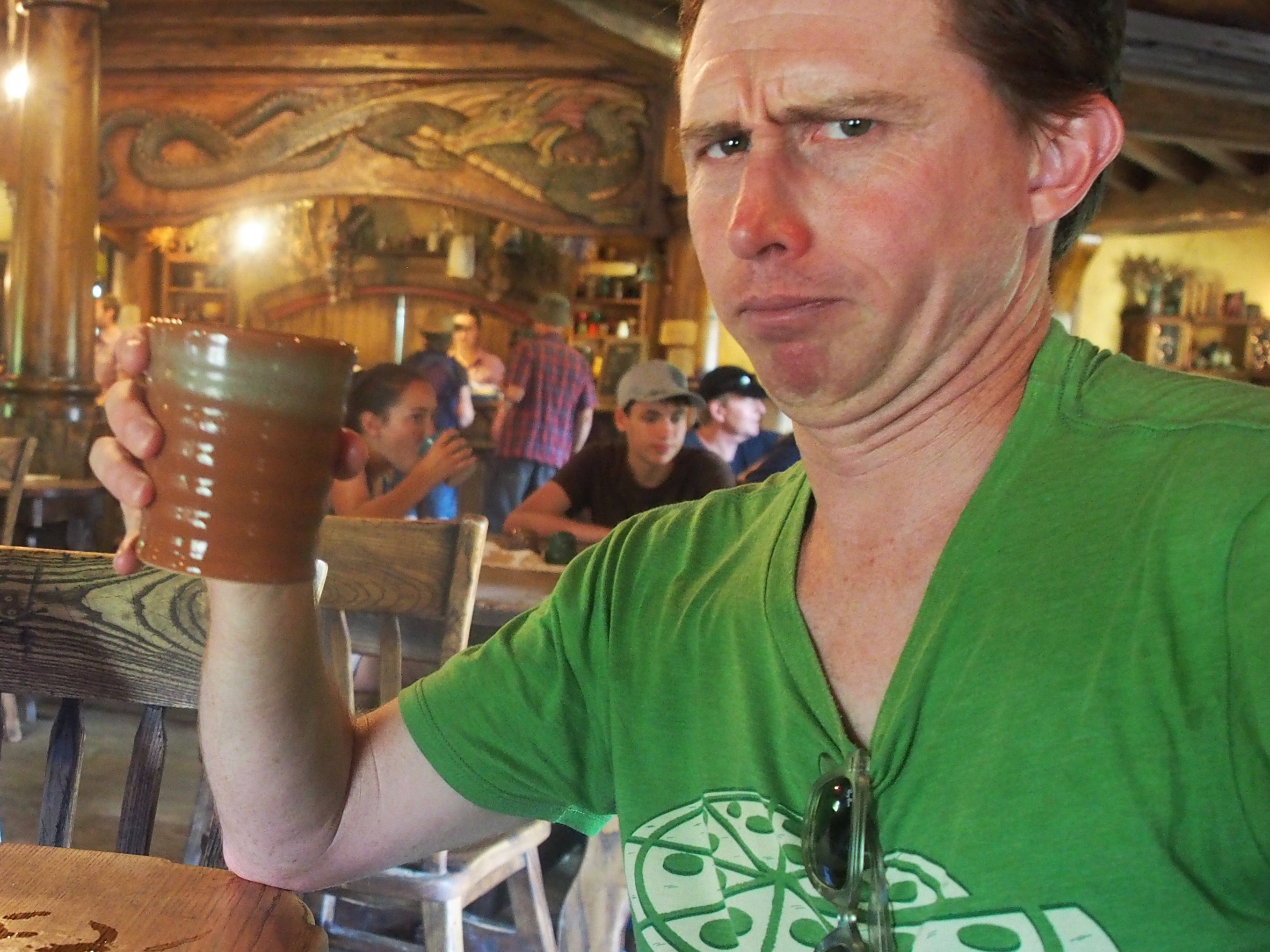